What you missed it?! Well don't fret too much, but as you might know (if you read this blog and love me.. Kelley Slagle does she was there!) we did a very special, and small sneak peek showing of Trenches last weekend at the Farpoint Convention in Maryland.

First let me say thank you to everyone who came out and for all the kind support. It's been a while since I have gone to an event and it was great to see so many good friends and colleagues. We had a fun screening of roughly 70 people who watched Trenches and after the first episode played the audience roared, cheered and clapped. A great response.
We watched all 10 episodes (yep the whole thing) and at the end people once again stood up cheered and clapped. A fun night to be had.. where were you?? Well you will have to wait for the online release to see it. based off the audience reaction we got at Farpoint, I think you will enjoy Trenches :)

Here is a very kind Review of the Trenches Screening by Dennis Bailey. 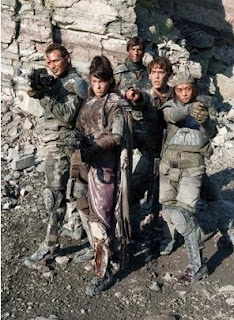 For me it is the greatest reward and very important that a cast and crew who worked so hard and killed themselves for little to no money, in the end feel that the film and end result of the work was worth it.

I make films for myself and my audience, but I also want them to be something my team is proud of and something they are glad to say they were a part of. You hope it gives them something back. Nothing is worst then working on a film for little money, long hours and such time and commitment and then it comes out and just sucks and you think "wow, I gave myself for that?!! Damn!" And then it hurts other small independent films because people don't want to work on them because they have been burned and have a bad taste iin there mouth.

But I also want the film or product to be part of the reward. Because we don't have the money to compensate them what they are truly worth, you have to hope the film will give something back to them. Give them something good for their demo reel, a strong resume line, a possible job and further their career and the accomplishment of team and doing what they say can not be done. That you can point to something hopefully good and say "I was a part of that, I was there.. we did it!" And after all the mud, blood and tears.. I say we did do it :)

Thanks to Farpoint for the continued kind staff and support, to everyone who came out and for all the drinks that night. I think it was very clear that I had way too many!
Posted by SHANE FELUX at 9:11 AM 4 comments: 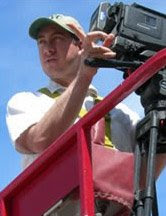 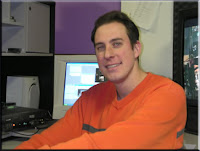 A fabulous production company, Linn Productions, and some very talented and good friends of mine Marc and Michael Linn have released their Feature Film "Imprint" on DVD.

This is very big as "Imprint" was their first feature film, got great reviews, festival and acclaim awards, and they were able to get theatrical and now DVD distribution. For a film maker this is great news as distribution is tough to get. I think the very best of Linn Productions and some day hope to work with them in the future. Very talented and just the best people.

Plot: Shayla Stonefeather, a Native American attorney prosecuting a Lakota teen in a controversial murder trial, returns to the reservation to say goodbye to her dying father. After the teen is killed, she hears ghostly voices and sees strange visions that cause her to re-examine beliefs she thought she left behind.

Imprint is a good fashion ghost story told in a well constructed way that has you guessing. Congrats to Linn Production and the team! Love ya Guys!!!

So if you are looking to support and see a new flick pick up a copy of Imprint today!
You will enjoy - tell 'em Shane sent ya :)

OK, here is a rare treat, if you have been wanting to see Trenches before the big online release then here is your chance.

You are invited to attend a special screening of "Trenches" on Friday, February 13, 2009 at the Farpoint Convention in Timonium, MD at 10pm in the Greenspring main Ballroom.

If you are already attending the Farpoint Convention and have purchased your membership the movie is part of the programming.

Not only will you be able to see "Trenches" but you will be able to attend other activities and events that are included with the price of Friday admission.

Also, we'll be having a get together for the cast and crew at the Northern Lights restaurant in the hotel an hour earlier at 9pm on Friday 2/13. Drinks and food are available for purchase.

Just a short addition, but this is a flick I have been waiting for a while. I saw a sneak of it almost a year ago or more. It looks like it is coming out now, but in very limited release.
Posted by SHANE FELUX at 9:58 AM 1 comment: