Homemade Hollywood- Fans Behind the Camera 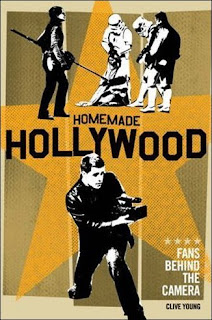 Here is something cool and you should check out. A new book titled Homemade Hollywood: Fans Behind the Camera

by Clive Young and foreword by Chris Gore,
(they have it in hard and soft cover- I could only make the link for the hardcover)

(Insight - Chris Gore was the guy who interviewed me on G4 "Attack of the Show" back in the day, and he couldn't say my first name right, It's Shane btw, and later I told him to give me back the Revelations DVD I gave him as a joke. Oh yeah long ago.
LOL - check it here if you want

The book has released on Amazon and if you look closely, check out who is on the cover (sort of.. well you wouldn't know it if I didn't tell you)

But yep, that top portion of the book is an image taken from the set of filming my first film Star Wars Revelations, and that is Holland Gedney kneeling on the ground, Matt and Dale Henry in Storm Trooper armor, our boom operator, and me with my back to the camera directing the scene. (I don't know who the guy on the bottom of the cover is but looks action snazzy with his camera)

You can watch more BTS of Revelations here that shot was taken from. Boy that was a long time ago, and about 15lbs lighter for me. What 5 years can do you and mid-thirties. crap!

Anyway, check out the book, Clive Young is a good guy and if you are interested in film making and film maker's experiences, tips and tricks, it's worth a read.
(they have limited copies at Amazon but I am sure they will get more)
Homemade Hollywood: Fans Behind the Camera

The book interviews me and talks about the way I made Revelations and my take and insight on Homemade Hollywood. I am not sure actually what that is, or what it says, it could say I am a total tool - I don't know, as I haven't gotten a copy of the book myself yet.. Hey Clive. .where is my copy??

Show me a nipple! 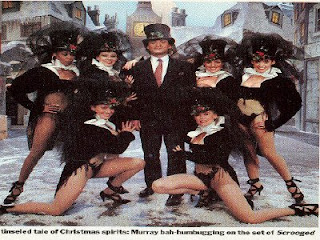 OK, don't let the title fool you or get any crazy ideas, or send me weird emails, but I bet the title grabbed your attention.

The title is actually a line from one of my favorite Christmas movies, as I mention about each year and it is that time of year again.

Can you name the Christmas movie?

If you can, you are stellar and should come over to my house to play "Scene it"

Here is a little more of a hint with further dialogue from the film and the picture above should help too.

So with that said and out of the way how about a bit more fun for you guys. If you are looking for some good holiday movies to watch here are a few I love.

- How The Grinch Who Stole Christmas - Jim Carrey (too damn Funny)
- A Christmas Story (classic)
- Gremlins (not for the little kids)
- The Santa Clause (love Tim Allen- always have)
- National Lampoon's Christmas Vacation (of course!)
- Home Alone (I got to go with it, it still makes me laugh)
- Love Actually (bring your Kleenex, a great flick)

And my favorite and 'must watch' each year, plus the answer to the "Show me a nipple" quiz
Scrooged- starring Bill Murray- priceless!!

SOME SCROOGED BEHIND THE SCENES
Here is a fun little story for you. I actually have a friend who back in the day worked on "Scrooged". He was a young, starting out producer, and was in charge of shooting some of the BTS work on the film. He was on set with his small crew waiting to get some stuff when Bill Murray, the star of Scrooged, came up noticing my friend and his crew and asked,
"Who are you?"

Being young and wanting to seem funny my friend replied,
"I'm the guy"

Murray with a slight raise grin,
"Really? I bet your not"

A bit taken aback my friend smiled, and trying to ease any tension, being sincere replied
"no.. I ah.. I really am." As he was the producer and in charge of his small BTS crew, and doing his job.

Murray nodded and again smiling said,
"I bet you anything your not"
and walked off.

A few minutes later as they were getting ready to shoot a scene, my friend gets setup to shoot some BTS, then director all of a sudden yells "who they hell are those guys! Get them off my set!"

Murray proved his point and had my friend kicked off the set. To this day I still find it funny! Maybe someday I can have that honor of Bill Murray kicking me off a set. One can dream.. one can dream :)


IN OTHER NEWS
Right, so the holiday is barreling down on us and for those 10 of you still reading out there and those of you who have been emailing me asking, "So when are we going to see this mythical, make-believe, Trenches you "supposedly made??"

To answer your questions. Trenches is done. Yep, it has been done and turned into the Studio in September. The last I heard from the sources on a release for Trenches was first quarter 2009.

That's as much as I know. But that said I think we will start ramping up and getting some more Video Blogs and sneak peeks of the series if you guys are interested. You have to let me know.

Till then, everyone be safe have a happy new year and keep your nipples to yourself :)
- Shane
Posted by SHANE FELUX at 12:54 PM No comments: