Here is one of the interviews I did while at NY ComicCon. This one is from FearNet, a great site with really good content. I love their site design! They interviewed for "The incredible Hulk" new movie, "The Sarah Connor Chronicles" , "Ghost Hunters" and many more. check 'em out! 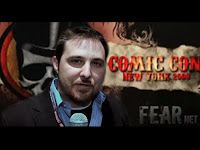 Why is it I always wink at the camera? I know.. it's because I am a dork.
Or it's just my Carol Burnett 'ear pull' gesture to my wife. Yeah, whenever I wink to the camera I am really sending a signal to my wife saying "I love you." .. yeah let's go with that, or that I am just a dork. Well what can I say.. you guys be the judge as I think the jury is still out on this one. BTW.. that's me at the end of the video making the scarry "Ooooooh" sound.. dork.
Posted by SHANE FELUX at 9:14 AM 3 comments:

Well if we missed you at the NY Comic Con event it wasn't my fault. I looked for you. Where were you? I text messaged you! .. ah well. I will catch you at the next event maybe.

Here is a pic from the "Trenches" panel we did at ComicCon
(man Aaron needs to cut his hair :)

So moving on, the NY trip was good and it was great to hang out with some very good friends. Unfortunately I got sick, I think I picked it up from on of the kids, as I was feeling a bit off when I flew into town. Now I am pretty miserable.

At the event Stage 9 released a new Trailer for Trenches.
Take a look at this studio cut trailer and let me know what you think.

The studio wanted to put out something new so there ya go. I dig the movie voice over guy. That made me smile. So perhaps a bit more info and look at Trenches as we work to completion and delivery. When you ask? Err.. soon. No later then July.. how about that? :)

Hope all is well with you and send some love sometime! 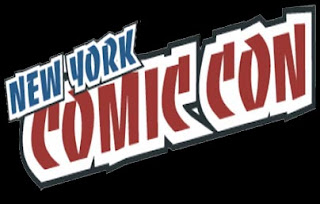 If you are wanting to catch me and see perhaps a bit more on Trenches, we will be at New York ComicCon this month April 18-20. So if you are on the east coast and near the big apple come on out to the event. It should be a lot of fun as Comic Con is one of the best with lots to see.

The idea is that Trenches will show perhaps a new trailer (cut by the studio.. be afraid) and will air right before the new Star Wars "Clone Wars" trailer and the new Indiana Jones Trailer.

Also from what I hear, a special ComicCon message from George Lucas and Harrison Ford.
From what I hear. See the full guest list here:

The "Trenches" presentation is stated for the place and time below. Check the schedule here:

Also at the event we will be giving out these new cool "Trenches" postcards I designed for the studio. let me know what you think?

Click on the postcard image to see larger size

IN OTHER NEWS:
The Associated Press put out an interesting article talking about Trenches, and even quoted me a few times. Read the article here. "TV Studios Embrace Originals on the web"

Also NewTeeVee.com mentions us in a very cool write up you should check out titled " Weekend Vid Picks: Fan Films Good Enough to Fool You" Thanks for thinking of us guys!

The one really cool thing is this live action "Legend of Zelda" (fake) trailer that was put out on April fools and man is it impressive. I fell for it to as I thought it looked awesome. The gaming site IGN, got people good with this one. Check it out.

Other Other News
Trenches now has full picture lock (thank you lord) what that means is that the studio has signed off on the full edit of the film and now the process for color, treatment, sound, music, FX call all focus on completing the film. Rejoice!

The funny thing is that picture lock is a huge piece off my shoulders but it's like this.
Crawling through the desert dying of thirst while burned at day and freezing at night., knowing that just over that next distant sand dune is civilization and salvation.

And so you crawl and crawl looking only to that distant sand dune and when finally at last you crawl up it, your mouth caked and dry with sand, your mind baked in the hot sun, that when you finally crest that sand dune.. . you look out and see..!
More sand .... and another distant dune with the teasing promise of hope.
Head down we start to crawl forward.

Yeah, it's kind of like that. So be my mirage and catch you at NY Comic Con :)