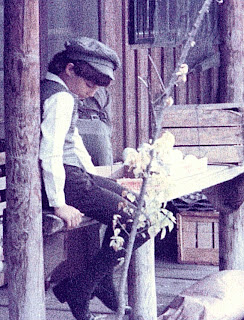 Here is something different and fun for you guys.

When I was a kid (ok still am) but regardless when I was younger, my aspirations had always been to be involved in movies, theater, TV ... The industry (though I didn't know it was called "the industry" for a long time.. in fact I just found that out thanks to this thing called the inter net.. or something)
Anyway, when I was young, it was a film called "Star Wars" that opened a new dream for me, "wow, I know what I would like to do.. I want to be involved in that .. somehow!"
yeah it's cliche but true.. sorry. Then a film called "Indiana Jones" and for a while I actually pursued becoming an archaeologist and researching the arc of the covenant.

My Grandmother gave me tons of religious things to read about the arc. I then soon realized archaeologists really don't carry whips and have exciting adventures, but really sit in some squaller sweating to death, while meticulously sweeping dust with a tiny brush for hours on end, to then discover "look I unearthed a tiny piece of a pot that looks more like a lump of dirt.. wow" 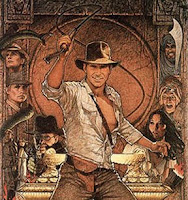 (to all the archaeologists out there .. I am sure it is a fascinating job, so no offense, but not for me) Plus I found out you have to be smart to be an archaeologist.. again .. not me :) . I think we are safe though, as I do not really see many archaeologists reading my blog.
So at a young age if I could not be these things, I could possibly play them, or make a story about these characters and adventures, and so at a young age I pursued it. 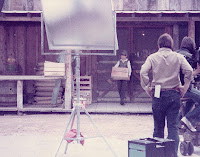 My first job in front of a professional camera was I think age 9 or 10. It was for an HEB Grocery store company training video. You know the ones they make you sit and watch when you join a new company.

Yeah, that was the one. I played a young Howard E. Butt, founder for HEB ( which is a huge grocery store chain in Texas where I am from)
My mom at the time worked for HEB and when they were looking for children to she knew I had a dream to do movies and so forth and brought it up " I have a son who would love to do it" 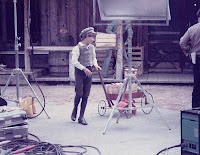 these old pictures of my first time on a set and my first acting job. She even still had the old VHS tape. So here it is for you, a retrospect look back when I grow up ... (look how cute I was!)

I have posted pictures of my first time on a set (wow the 70's) and my first short acting job. even then it was a lot of hurry up and wait :)

Now today I still would not be able to do this without the support of my friends and family and though she reads this blog rarely, a big thank you to my wife! It's very hard I know.
Note: If you watch the video, notice how the kid (yes that me) actually looks at the camera .. amateur! So when I grow up I want to be in movies .. let me know how it turns out, as I am still waiting to grow up .. someday.

So here is my 5seconds of fame at age 10. Boy I sure could pull a wagon back then, just look at the dedication and believablilty, I really believe his is pulling a wagon and loading grocerys. genius. Well we all start somewhere, and for me it was at a young age.
SHANE FELUX - FIRST ACTING JOB AT AGE 10
Posted by SHANE FELUX at 1:22 PM 2 comments: