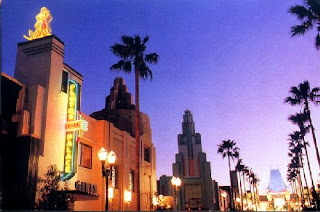 Well, last week I had to travel out to LA for a day to meet with the studio to go over Trenches as well as go into a post production house to look at color timing and treatment for the film.

So, I fly out last Thursday night and got to my hotel at about 2am my time(eastern).
I stayed up a bit working on the presentation and materials I was to be showing the studio that day, and got to bed at about 4am (again my time)

The studio put me up in West

Hollywood, which is pretty cool, and I guess could be considered the equivalent of the village in NY but more glitzy. I stayed at an interesting parlor hotel called "The Grafton" right on Sunset. It's a pretty different hotel and definitely Hollywood. When I got to my room there is this huge picture over my bed of an artsy B/W photo of a girl's legs in fishnet's.. OK .. so I am at West Hollywood.. kewl ..but different. Dig the zebra skin comforter! I could just imagine if I had the family and my kids with me.. that would be funny. "it's called art kids.. now get down from there and stop touching that"

So I have a west coast breakfast of gram pancakes, egg whites, and fruit (yeah I am in Hollywood, and when in Rome .. btw, does that rule only apply just when you are in Rome or other cities as well? ) Anyway, I head over to the ABC building in Burbank to meet with the studio. the meeting went great and the studio is very positive and excited about the project. My deadline to finish Trenches is April 30. You guys keep me on this but don't push me to hard... I am fragile and could break :)

So everyone is on the same page, loving what we are seeing and it is then off to The Post Group, the post production house who is currently taking on the challenge of color/finishing Trenches. No easy task. I sat in a 4 hour session with the colorist and staff/ studio staff and was very pleased with what I w 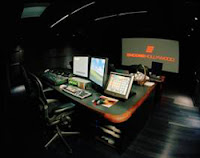 Trenches is being colored on a Da Vinci 2K System, pretty amazing technology. I am fascinated and love the final process of post production. To me that is where it all comes together and the film takes it's true life. The art of color and finishing is amazing to me and so important. As is music and sound design. hell every little bit that makes it happen. It all adds up and makes a film what it is when you finally get to see it.

After this session I had another 2 hour meeting with my FX Post team heads, and then we all went for some dinner. After that long day I simply went back to my hotel, watched some "Entourage", (love that series) and then crashed.

Saturday morning I got up early, had a quick breakfast with my good friend and writer for Trenches, Peter Robinson, then off to LAX, and I was back home. A fast whirl wind tour and then back to work on Monday. That's the latest for me. So you see it's not all glamorous guys. It's just me trying to do a job and be proud of what I am doing so I can give you guys something I hope you and I both enjoy.

Trenches is looking great and we are getting some work done. The FX team is starting to crank out some great shots and music/ sound are working their magic. I have to be finished and done by April 30th. So that gives you guys something as to when the series might come out for you to watch. Let's stick together and see it through... then you owe me a drink :)


IN OTHER NEWS - TRENCHES
A few weeks back there was some news put out by the Hollywood Reporter that Trenches was finished but delayed to release from Stage 9. This simply is not the cast or accurate. I WISH I was done with Trenches, but the fact is I am still working on the film and no delays are due to WGA strikes or Disney at this time. the only delay is Shane is still working to finish it :)
Here is a better article by Chris Albrecht that has the facts more clear on the subject.

Also, it looks like I will be going for a day to the Farpoint convention to show a few things and talk about Trenches. So if you are in the Baltimore, MD area February 16, I should be there.
Their other guests include:
James Callis (Battlestar Galactica)
Marina Sirtis (Star Trek:TNG)
Erin Gray (Buck Rogers in the 25th Century)
Posted by SHANE FELUX at 9:51 AM 2 comments:

Oh yeah.. Happy New Year and all that.. wow, I almost did realize it was the new year, what year is it anyway??

Well, a new year ,my birthday and all that actually past and we are older, tireder, wiser.. ok mainly tireder (is that a word?) let's go with that. I know I am getting older when I it gets harder and harder to stay up till midnight unless you have to, and these days I have to, even beyond. Mostly each night I am in a dark cave editing on Trenches and making some good progress. It's coming guys, it's coming, but a great deal of work yet to be done (I think I keep saying that in each post.. ah well)

So Happy New something and .. ok back to work for me.. I really don't see what is so new about this year compared to the last one. I am still tired and still working late hours (sigh)

In other news the LA Times mentioned Trenches briefly in an article, "Sites to watch in 2008"
So we seem to be on the radar and 2008 holds great things .. yet it is so far away ... I guess the news is able to see way into the future or something. 2008 that is a long way off yet, and my name is what again? right back to work.
Posted by SHANE FELUX at 4:29 PM 3 comments: