I ran across this while reading Trey Stokes Blog (creator of Pink Five) and thought it was kind of cool. In connection with the Star Film Challenge on Atom Films, sanctioned by Lucas Film, Spike TV is actually airing some of the winning Fan films. Pretty cool for us little guys.
Check out the Spike TV promo they are running, and low and behold they are using a great deal of Pitching Lucas in the Promo..

For my cast and crew out there "Look your on TV!" Did you ever think taking a chance with a little guy like me making silly fan films would get your there? I didn't, but I am so glad you guys are being shown! the Ewok is actually my 6 year old son Ian who was only 4 at the time when I filmed him for Pitching Lucas... I know he will get a kick out of this.
For me I do not get a chance to watch much TV these days as I work on Trenches so I was surprised to see this promo, and I have no idea if they aired Pitching Lucas or just used it for the promo. You tell me if you know more. Thanks Trey for posting about this.
Posted by SHANE FELUX at 12:40 PM 2 comments: 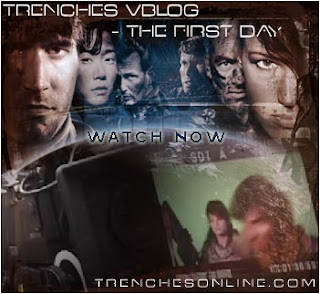 So if you have gotten the itch to know or watch more about Trenches as we on the Post team work as hard as we can to get you a release soon. I am proud to offer you our first episode of the Trenches VBlog entry that we hope to put out twice a month or so. WATCH NOW

The Trenches VBlog is a Behind the scenes look at the making of the film, the people that go into it and some glances at the film as we were shooting. See all the crew & cast that makeS up Trenches, and keep checking back with us as we release more and more. Other then the dork director in this first Vblog episode, hopefully you guys will enjoy it. Your cure for Trench Rot :)

(You know if this film is bad (and from what I am seeing I do not believe it will be) but if it is, I can so see critiques using that wit in a write-up "Trenches is as good and feels as good as Trench Rot!" yeah .. just remember I said it first - but it's not true I tell you :)

So I hope that cureS any itch you might have for now on Trenches, otherwise if you are still having problems you might want to see a doctor about that or get some ointment or something. in the meantime we will keep working over here as Fall is creeping up on us way to fast!
Posted by SHANE FELUX at 12:01 PM 4 comments: 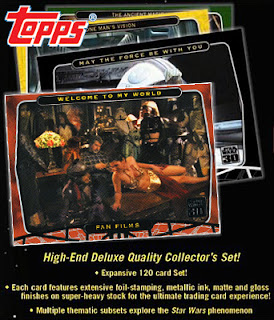 When I was a kid a few things you dream about. Being in movies, being a fireman or astronaut, and being on a trading card. Among other things.
Well I have made some movies and even have seen myself on the big screen, the whole fireman thing didn't work out and astronauts have to be smart, not really me.

But Topps, one of largest makers of sports and entertainment trading cards, has just put out a new Star Wars trading card set celebrating the 30 years of Star Wars, and I am amazed, honored and stunned that my film "Pitching Lucas" is on one of these cards. # 117 to be exact.

The card kindly features on the front a nice picture image from the closing of "Pitching Lucas" and even has a very kind write up about the film on the back of the card and printing my name for all star wars collectors, fans, and kids like me to read.

(Click on card images below to see larger size) 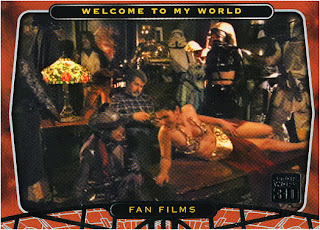 I have to say I never thought one of my films would be on a trading card or my name printed on one. How kewl is that!

A special and huge thank you to Topps and Lucas film for even recognizing fan films, as there are a total of three cards in the 120 card set, showcasing Star Wars fan films such as Pitching Lucas.
Each card has a main picture from a select film on the front, and then a short write up and then another short 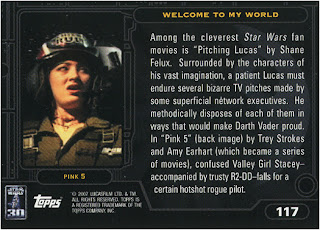 blurb and small picture from another fan film. My card #117, titled "Welcome to my world" shares the back with renowned and popular fan film "Pink Five" Directed by Trey Stokes. A guy I think I can call a friend now that we talked a good deal at the last Star Wars celebration event. Way to go Trey and Stacey!

What can I say, but what an honor and a thrill! A childhood dream! If only trading cards still came with gum, now that was something, and I always loved the smell.

If you guys want a copy you can pick up the Star Wars 30th anniversary trading card set from Topps at comic stores and retailers who sell trading cards, your favorite and mine.. Ebay, or here is a place to order online.

The set includes 120 base cards spanning all six movies, TV movies and appearances, deleted scenes, fan films and some other little treats such as Artist Sketch and Autograph Cards. But the one you really want is card #117 - my new number :)

one of the first to interview me back in the day when I released Revelations and they have continued to follow my films.

When they got wind of Trenches, they kindly asked if I would be interested in speaking about the project and the making of. I am always happy to and Slice of Scifi has always been there and a great program.

So if you want some further insight, the general ramblings of me, and the making of Trenches, go check out Slice of Scifi's latest podcast release #124. I understand they also broadcast on XM Radio. A special thank you to Michael, Summer and the crew over at SOSF. You guys are great and thanks for all the kind interest and support!

LISTEN TO THE PODCAST INTERVIEW NOW
Let me know what you guys think of.

Also be sure to join friends with the Trenches Myspace.
- Shane
Posted by SHANE FELUX at 10:35 AM 2 comments: