Happy Holidays to all! 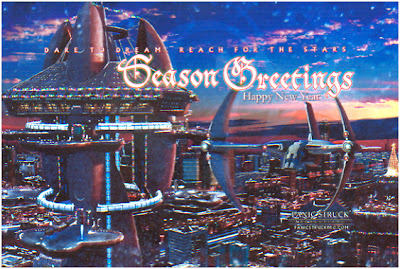 Wishing you all a happy and safe holiday season and the very best for the New Year. Thank you for all your support and we hope you will continue to join us for the adventures that lay ahead.
2007 looks to be a very exciting time.
Dare to dream and reach for the stars. Happy Holidays!
- card art courtesy of Greg Metcalf / Panic FX
Posted by SHANE FELUX at 10:18 PM 2 comments:

Jolly Ol’ England and Back Again 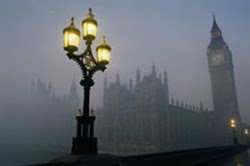 Well the latest is that I am back from a week ½ business trip from jolly ol’ England. It was a good trip if not wet and cold. My highlights of course were seeing the tourist sights such as Big Ben, Parliament, Tower of London, Buckingham, Trafalgar Square, Horse Guard, Changing of the Guard (and no I didn't do the ugly american) and so forth.

The one thing I enjoyed and found fascinating with London is the remarkable architecture. Here you have a mixture of different styles built on top of and around each other as the years change. Beautiful architecture and detailed work in Tutor, Stuart, Victorian, Regent, and more .. Just stunning to see, and all the history behind everything. It seems like everything in London has a story. 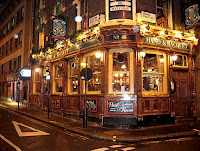 One night I went on a pub crawl tour which was most excellent and I highly recommend it to my (of age drinking) audience. The tour started at 4:30pm and we finished at about a half past midnight. By that time even the tour guide was pissed (British talk for drunk) and the group who went on the tour was whittled down to the hardcore drinkers and adventures.

It was a blast, as you start out in a group in which no one is talking to each other, by the end you are hugging each other, doing the whole drunk “ I love 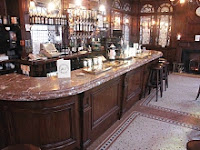 you man”, and buying rounds for each other. Our tour guide was a funny charming big Paddy (British for Irish.) and he took us to some of London’s best and most unique pubs in which we were told “ you will have 20-15 mins per pub, and I deem when we leave. My tour my rules. This is a pub crawl and by that name you may have guest it, we are going to pubs. Real men drink a pint, (at that time a feminine voice in the group yelled) “and real women”
At that our Irish guide smiled and said in a draw“ Ahh Lass. That they do! ”

Now, I can remember a few pub names we went to and the rest is kind of a nice blur. We visited: “ The Sherlock Holmes Pub” “Lyceum” “ The Ship and Shovell” “The Black Friar” “The Cockpit” “The Cheshire Cheese” and that is all I remember right now. This was a great tour and we walked along the dark cool streets of London in some of the same haunts that Jack the Ripper and Sweeney Todd would have been. I recommend the “ghost and gaslight pub crawl” done by the Big Bus Tours. Ask for Allen.

Now the other things I will say about London and the UK is that is it expensive! Especially for me as the US buck is weak right now and it takes two of them to make 1 pound (British money) So I am paying double the price, like a cab in London cost me 20 pounds.. That’s close to $40 for me.. Ouch!

Also food in England is very different then the states for the most part. It’s fairly bland and potato chips are called “Crisps” and fries are called “Chips” don’t confuse them J
Also in a pub a waiters does not seat you. You have to find a table on your own and then you walk up and order your food and drinks at the bar. Simply tell the bar tender your table number. You also pay at the bar as they generally do not bring you a bill to your table. Also Quid is slang for pound. Like our buck is for dollar. If someone says “ that’s 10 Quid” they are saying 10 pounds. But I am sure you all know this.

And people in London are not all nice British and friendly like on “ National Lampoon’s European Vacation” with Chevy Chase. Nope they can be pretty cold to you. They are not all out rude, New York is far worse.. or Jersey for god sakes .. Uhhh. (Love ya Frank and Gina) But for the most part the people are ok and pretty patient being in such a large city with so many 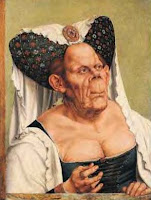 people. And my last comment and no offense my UK friends but I do not think the UK has any pretty women.. At least I didn’t see any national pretty British woman. I do not think the country has any. Of course this is all a matter of opinion and I know I am nothing to brag about. But this is not about me and my sexiness, but the sad lack England has of pretty girls. I think they have to import them in from Scotland, Sweden, or the US or something. I am sorry Britain I didn’t see any good looking women while I was there and I wasn’t that drunk the whole time.

But the trip was fine and I learned that Brits party hard during the holiday season. From December to late January they pretty much party the whole time. Ya got to love em for that. So I had tea with the queen mum and she hit me with her hand bag, had drinks with Eddie Izzard and he showed me how to dress, and had a brilliant smashing good time in England (it was OK) . I am very glad to be back home.

And as we make it close to the holiday season let me say Happy Holidays to you and all. The New Year looks to be bringing us some large things to come which I will reveal as I can, and I hope you are still around reading here for the adventures we continue as we press on through. Till that time have a happy and safe holiday season!
Posted by SHANE FELUX at 10:06 AM No comments: