Here is a really cool treat! In the latest '06 Oct/Nov issue of Star Wars insider (Issue #90) there is an article about the winners of the 2006 Star Wars Fan Film winners and they choose to do a very kind article on "Pitching Lucas" and myself. They used some good quotes from me which was very kind of them. Check out this new addition to the Star Wars Insider Magazine and they even have a photo of me in the issue. Pretty kewl gang!

SPECIAL NOTE: In this Issue #90 of the Star Wars Insider is a VERY SPECIAL full page ad I paid to put in to thank all my cast, crew and the many supporters that have stood behind us. I basically took some of the money I won from the contest and tried to give a little back to the people who volunteered and helped make "Pitching Lucas" possible. A special thank you to Adam Benton, one of my CG artists an Panic FX, who did the 3D throphy, popcorn, and film reel model/render for the art I created for this ad. Thanks for the help Adam! It was my way to

give credit and a special spotlight to the wonderful people behind the scenes who made the film possible and for making it the winner that it is. Without these people I would not have been able to do and create what I did for "Pitching Lucas" and I wanted to thank all of you! This one is for you!!! Take the ad and frame it and you will have something to remember of what we did and what you helped to accomplish with our little film "Pitching Lucas". Thank you for everything gang! Here is a look see at what the full page ad looks like.

The issue should hit newsstands around the end of October or you can sign up and join to be a Star Wars hyperspace member and you get a subscription to the Star Wars Insider. As a hyperspace member you also get access to exclusive star Wars member info and videos from starwars.com. My favorite is the "Rancho Obiwan" series Steve Sansweet does each month showing his immense Star Wars collection.. Museum really. Click the "Hyperspace" link to join and get your issue #90 of the Star Wars Insider.

If you go to starwars.com you will see that "Pitching Lucas" is on the main home page. Pretty cool. In terms of what have I been up to and so forth, I just finished a music video shoot this past weekend with my excellent crew and I should be posting pictures and a new blog entry on that adventure next.

In the meantime enjoy the article in the Star Wars Insider about "Pitching Lucas" and be sure to check out the full page ad from X-ILE PICTURES to you! 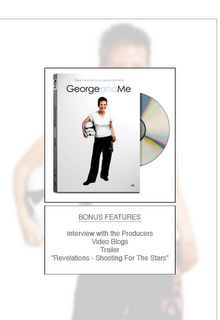 Well in my last post I told you guys about a new star wars documentary called "George and Me", well 5 heads tall Productions just posted their pre-order link for the DVD.
Again it features interviews with myself and others from "Revelations" and they even have "Revelations - Shooting for the Stars" on their bonus section of the DVD.. whatever that is. I am curious myself. One thing I know is that 5 heads tall does some great production value and puts out some great products. I have seen some sneak looks of the film and it looks really good. So if you guys want to check it out you can pre-order now. PURCHASE FROM HERE.
Posted by SHANE FELUX at 7:41 AM No comments:

Merrily we roll along .. News and more

Well, some bit of news is that a new DVD documentary about Star Wars fan films is coming out this month and it is done by the wonderful people at 5 Heads Tall Productions. These are the people who brought you Inside-Report, which we have been on a few times. Inside-Report is a great internet show about fan films and independent film, hosted by Sky Wilson who does an awesome job (regardless if I have a hard time understanding sometimes :)

Anyway, they have a new DVD coming out this month called "George and Me" which investigates how much of a positive "force" Star Wars has been on fan's lives since its release nearly 30 years ago. It shows that the traditional stereotype of the "geeky" fan has little value in today's world and that being a fan can really enrich your life and give you the courage to shoot for the stars. It features interviews with fans such as Albin Johnson founder of the 501st,, and Shane Felux director of "Revelations", the most successful fan-film to date. It also features many other fans from across the globe who have all done amazing and wonderful things because of their love for Star Wars.

The film took the two indie producers, Sky Wilson and Vin Kelly, nearly 2 years to complete, financing the whole operation themselves travelled across the United States and all over England in order to see first hand the amazing accomplishments that fans had achieved.

Check this one out guys and see what you this. Sky and her team aways put our great quality and I am excited to see how this piece turned out. Let me know what you guys think of it. 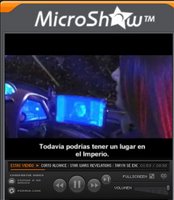 se­, hablo espanol?? - Well now for our spanish speaking friends you can watch "Revelations" in espanol subtitles, thanks to our friends in Buenos Aires and microshow.com
This is really cool streaming video and they really did a nice job of putting thSpanishup in spanish, they even created chapters. Isn't technology and the internet great? We are international!! .. well we always have been, but it's still strange for me to see our film in different languges. Very cool. WATCH IT HERE

NEWS FROM THE RANCH
Also I got a bit of cool news from a contact at mine at LucasFilm who advised me on the following email that was sent to their employees.

Steve Sansweet and Mary Franklin, our Fan Relations gurus, will be bringing us another installment of Star Wars Fan Films tomorrow:

Lots of creative Star Wars fans make their own films about the saga, and for the second year running, we'll be presenting the best of them to the folks back here at Lucasfilm. Come and enjoy this year's best shorts including the double-award winner "Pitching Lucas," a hilarious 8-minute film about "Hollywood types" coming to George's office to pitch him on their ideas for a Star Wars television series. We'll also be showing the best of five years worth of films from the annual Star Wars Fan Film Awards co-hosted by Atomfilms and Lucasfilm.

All are welcome to attend.
Hope to see you there!

I have to say I thought that was cool and I would love to be a fly on the wall to see what the creative and talented team over at LucasFilm and their fellow shops like ILM, SkywalkerSound, LucasArts, and so forth had to say about it. The fact that our film conreceived be shown and receieved such a nice write up from their internal system is very cool.
I have emailed Steve Sansweet to see if he could let me know how the response was, and I will let you guys know if I hear something. Such a great honor to have our film shown at the ranch and thank you to the kind support at LucasFilm and keeping the spirit of Star Wars alive.

On top of working 9-5 and taking care of the family, and all that jazz I continue to strive forward and I do not sit still for long. I have a new film project in which I am filming another music video. This is my first paid gig and filelse'sing using someone elses money other then my own, so it's kind of exciting. It's nothing big and I figured... hmm, new baby, make a little extra cash ... OK I'll do it, and this time I can actually pay my cast and crew a bit, that's a new one :)
We shall see how it turns out.

HERE ARE A FEW PICS OF THE LOCATION WE WILL BE SHOOTING AT IN THE SHIZEL OF BALTIMORE. Ahh I love grit .. pretty huh.. yeah but on film. wait and see.
Posted by SHANE FELUX at 10:08 AM 2 comments: