As promised here are some BTS pictures from "Pitching Lucas"
BEHIND THE SCENES IMAGE GALLERY FOR "PITCHING LUCAS"
Special thanks to Steve Lesnik for providing these pictures.
Here you can see what goes into making this short film and the many wonderful people behind and in fornt of the camera.

"Pitching Lucas" was filmed on three locations. Two days in studio for all greenscreen work, One day for interiors of Lucas' Office scenes, and one day special for the mechanical bull shot. Thank you to "Desperatos" in VA Beach for allowing us to shoot on their location. Thanks to all our excellent cast and crew!

If you still havent seen the film or voted yet, be sure to head over to Atom Films and watch the 2006 star wars fan film finalists.

Vote "Pitching Lucas" and please leave a review and rate us on their star system.
Posted by SHANE FELUX at 8:47 AM 1 comment: 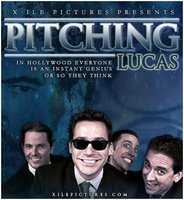 OK, for those of you who visit here (all 8 of you) I am very pleased to annouce the release of our new fim "Pitching Lucas"!
This is a short 8 min Star Wars comedy we created, and has been accepted into the 2006 Atom Film Star Wars contest. We are very thrilled and honored to be a part of this event.

Watch the film here and vote for "Pitching Lucas' if you like it.

Now to answer and get into it.
"Pitching Lucas" was made in 4 months time and cost $2400 to make. That's it.
It's very easy to keep costs down when everyone is a volunteer (including myself) and we do it for the belief of filmmaking and the quality and challenge we try to do, as well as for the love and showing what the little guy can do. We keep pressing forward, trying to grown, and expand on what is possible. It is also a pleasure to work with so many wonderful talented people and I want to thank everyone who helped and was a part of making "Pitching Lucas" happen!

Now why do another fan film?

Well for us, or for me, the Atom Star Wars Film contest is coming full circle from where we began, which was "Revelations" When we started to make and think about making "Revelations" the original idea was to make an entry for the 2002 atom film contest, but I decided I wanted to do a large serious film and we moved on... the end result of that was 3 years of work and "Revelations"

Atom films is what kind of inspired us to start making films and to get out there and do what we have dreamed to do. So we have always wanted to be a part of the contest and now that "Revelations" was done, I called the old team and said, " how about one more for fun guys, just to see what we can do" and everyone agreed. So I worked with my same crew again as well as new people, using "Pitching Lucas" as a test-bed for what we can do, and looking forward to produce other films that would be original, as well as have fun. We are very proud and pleased with the end result and hope you guys will go watch it, vote for "Pitching Lucas" and lease some nice comments at Atom Film for us. We of course appreciate the support.

What do we win?
Well there are two major awards:

Well, First place is the 'Lucas Select' award, in which George Lucas picks himself. The winner gets $2000, a private video message from George, a sweet trophy, bragging rights, and their film placed in the front page of starwars.com and atomfilms.com

Second place, the 'Audience Choice' award, gets
a sweet trophy, bragging rights, and their film placed in the front page of starwars.com and atomfilms.com

So if you want to see what I have been working on go check it out at atomfilms.com and vote "Pitching Lucas" watch all the entires and see what you think. We of course appreciate the support and hope you enjoy the film! A huge thanks to my wonderful cast and crew.. love ya guys!!!

And tell all your friends, and your firend's friends and people you do not know and your dog (if he can vote) and all the animals and start a huge interoffice "ya got to watch this" craze.. make it happen people.. all 8 of you.. let's see what you can do :)
I will be posting some BTS pics and others from "Pitching Lucas" for you guys as soon as I can. Bear with me :)

I came across this new magazine I thought was pretty cool called , Fan Film Quarterly, or FFQ, as it is focused on fan films and the fan film community.

It's still pretty small and new right now and not much of a website, but when I went to go look at some of their issues I noticed that Issue #2 has "Revelations" on the cover.
The first thing I think is, "Now that's odd. I had never heard of this magazine and don't remember speaking with them"

I was able to contact the editor and he stated he hoped we didn't mind them using our poster art as the cover to one of their issues. He said they put it out their for their reader to vote which one they would like, Grayson, Revelations, or a Punisher fan film., and the reader's picked "Revelations"

I told him I am fine with them using us as a cover, only I wished I had know as I would have loved to give them some press about it on our website and so forth.
Now that said, there was another supposed fan film magazine called "Online Entertainment" which turned out to be a jerk of a rip off. They did a feature magazine on "Revelations" got orders and then never delivered to anyone. I myself bought a copy to support the publisher and even I never got a copy. Some people do anything to turn a quick easy buck off other people's work. You can complain to Ed Gross about it as he was the editor and is the one who took your money.

But this new magazine I found is on the up and up, and as I stated, they are small but they seem to be pretty cool and the editor was very kind and supportive, even though his latest issue #4 states the top 10 fan films and we are #11 .. We didn't make the cut LOL.
Would you believe "Broken allegiance" beat us out for the 10 spot?

In the current issue the editor put a plug in that said, "If you feel "Revelations" should be in the top 10 of fan films, please email the editor and let us know" OK so if you guys want go ahead and tell them. All 5 of you :)

Anyway I recommend you guys go and check it out and see what you think. If you love fan films and want the latest and greatest news this is the mag. Check out Fan Film Quarterly
Here is a cover of their latest issue
(what demographic do you think they are trying to hit? I wonder :)

Fan films arewhat inspired me to make my first film and I have an affinity to it, and I believe in supporting and cheering on the very think that got me off my butt and making films. You have to start somewhere, why not do something fun and you love?
Posted by SHANE FELUX at 10:07 PM 2 comments:

"Overnight" how to destroy yourself

I have to share with you guys this facinating documentary film I just watched, as I think you would get a lot out of watching it, and hopefully learn what not to do if you ever go far. But before I get to far into it I have to give a thanks to Trey Stokes, as much as I hate to ;) who loves ya Trey!, as he is the one who actually recommended the film "Overnight" and it was a good call. "Overnight" is a fascinating tale and thanks to Trey. Now I am passing the info to you guys.. all 8 of you (hey look we have more readers now!)

Anyway I caught Trey's podcast interview he did on "Framed" and he recommended this docu film called "Overnight".

I say this is a great documentary not for the fact that it is a well made film but for what the film is about and the subject. "Overnight" centers around Troy Duffy, a vulgar and egocentric barman who managed to sell Miramax head Harvey Weinstein the right to his script "Boondock Saints" as well as a contract for his band and co-ownership of his pub. This documentary film was supposed to capture Duffy's"historic" simultaneous film and music rise to fame. But turned into how Duffy single handedly killed and destroyed his career, his relationship with friends, family, and any and all chances of ever working in Hollywood again. If you watch this film you will be amazed at how this drunk, chain-smoking jackass, who views himself as tinsletown's boy wonder genius, ever got a shot, and has now been labeled as the reason that studios and big executives will never again give a shot to a nobody. Thanks a lot Troy!

Go out and watch this film gang and really appreciate and know that it doesn't matter who you are or who you think you are, being an arrogent ass is never the right direction. Being a jerk doesn't get you anywhere in life I have found and Troy Duffy is a great example of that to watch, laugh and learn. I had to watch this film twice as I found it so amazing that anyone is this stupid, arrogent, and blind. I just shook my head the whole time. The film itself "Overnight" is not done really well for a documentary, as it's not really telling the story well enough and confuses you at times but it's more like watching a reality show train wreak, and like a good train wreck you simply can not turn away. wow. Watch this one gang and learn.
Go ahead and NETFLIX IT!
Posted by SHANE FELUX at 10:25 AM No comments: