I am a bit behind on some of the magazines I have been getting in that have articles or interviews on us and I thought this one was a nice one to share with you. It's from the Winter issue #57 of Videoscope (due out in stores next week or so). 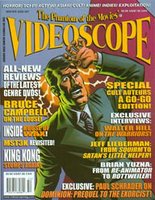 First thing, I get this mag in the mail from the editor (I didn't even know they did a write-up on us.. thanks Videoscope) and I think "OK, what's this about?" I don't see us listed in the TOC or anything so I start thumbing through the magazine and I only stop as I see a picture of George Lucas and low and behold there is a review on "Revelations" right below the picture and RIGHT next to the Star Wars "Revenge of The Sith" review. "How cool is this!" I say.

Better yet Videoscope has some fairly kind remarks and I was flattered at the kind review.
(I have read really bad ones, and that was what I expected to read :) The really funny thing is that we were awarded a review rank of 2.5 out of 4, and here is the kicker, "Revenge of the Sith" is awarded a rank of 3, so we are just half a mark off from what a 114 million dollar film did against our 20K film, hah that is kind and generous, and made me smile. Rather then type the review here is a scan of the article for you to hopefull enjoy.
VIDEOSCOPE: REVELATIONS REVIEW
Posted by SHANE FELUX at 12:13 AM 2 comments:

Well, as some of you might have read in an earlier post that Panic Struck Productions actually had some presents at this year Sundance Film Festival 06'. I got an email from Adobe and they emailed me the PDF file of the banner they used at the festival featuring our film "Revelations" CHECK IT OUT.

I would have given anything to see that banner live at the festival and snapped a shot of that. This banner was 33.5" X 80".. pretty good size, and it would have warmed my heart to see. The little guy actually there at the heart of one of the largest A-list film festivals. Not bad and it's a great start for us first time out of the gate.

Adobe also advised they will be sending me some hard copies of the brochure and pamphlets they handed out at the festival that had our film in it. That will be cool to see.

Even cooler news.. Abobe finally released the interview clip they did with me and it is now on their website! This interview featuring Panic Struck Productions and what we did with their excellent software solutions applied to "Revelations" and was used as marketing content at Sundance. NICE!

Take a LOOK! The interview was shot in HD and Adobe did a nice treatment and the guys who shot it did some great lighting and camera work. Thank you to Adobe and Big Sky Communications (who actually did the work.. nice job Big Sky!) We are honored by this and appreciate the support!
Posted by SHANE FELUX at 11:19 PM No comments: